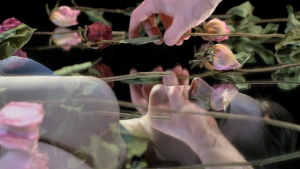 "When She Begins to Sway" was written and directed by Cory Carroll, and stars Crystal Dosser and Justin Stewart.

UAA students from the departments of Journalism & Communication and Theater & Dance came together to create a film for ARTic Convergence, a new artistic endeavor from the Anchorage Symphony.

The student-made film, "When She Begins to Sway," explores the commitment level of a couple's relationship after an argument--to stay or leave. Can trust and forgiveness be reached, or is it too late? Will your last words be the final farewell? The film merges narrative fiction cinematography with dance theater choreography, and features the Anchorage Symphony Orchestra composition "Lamma Bada."

"When She Begins to Sway" will premiere as part of the first ARTic Convergence concert on March 26, at 8 p.m., in the Sydney Laurence Theatre. The night will feature original short films with a live soundtrack by the Anchorage Symphony Orchestra. Maestro Randy Fleischer will lead a Q-and-A session after the concert, allowing audiences to hear directly from the filmmakers and musicians. Tickets are on sale now at CenterTix.net.

For more information about the film, contact De Gosh Reed at dereed4@alaska.edu.