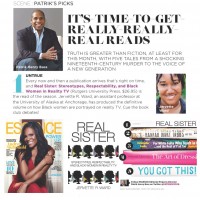 Jervette R. Ward, Ph.D, assistant professor of English at UAA, has been recognized by Essence Magazine.

Ward earned her Ph.D. in English, with a focus on literary & cultural studies, from the University of Memphis. Her research and teaching areas focus on American literature with an emphasis in African-American women's literature. She has taught and published on Zora Neale Hurston, the addition of the African-American characters to the Dick and Jane series, and Black women in reality television. Currently, she is writing a book in response to the book and film The Help.

Essence is the premiere lifestyle, fashion and beauty magazine for African-American women. Every month African-American women rely on Essence for editorial content designed to help them move their lives forward personally, professionally, intellectually and spiritually. Sections such as Work & Wealth, Healthy Living, and Looks We Love cover topics that focus on career and finance, health and lifestyle, and fashion and beauty, and share an intimate connection with readers. The publication has a monthly circulation of about one million and a readership of 8.5 million. The first issue of Essence hit the newsstands in May 1970.

Real Sister is published by Rutgers University Press. Darnell Hunt, editor of Channeling Blackness, said of the book, "A frank meditation on the images of black women in television's most dominant form, Real Sister exposes the ways in which the ambivalent pleasures derived from reality TV's obligatory train wrecks implicate black women as both victim and entrepreneur."

For more information, or to schedule an interview, please contact the UAA Department of English at (907) 786-4348.