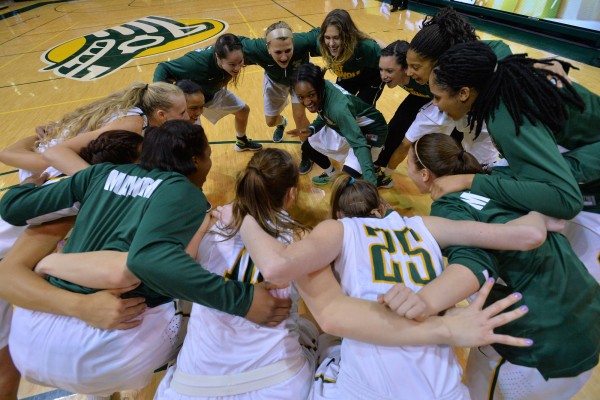 Indiana is known for its basketball pedigree, so it's a fitting destination to cap a landmark season for the UAA women's basketball program.

The Seawolves compete in the NCAA Division II national championship game Monday at 11 a.m. AKDT in Indianapolis, facing off against undefeated Lubbock Christian University. It's the last stop of a banner year; the Seawolves-ranked number one in the nation earlier this season-are currently 38-2 and even received a write-up from Newsweek proclaiming them the best women's team this side of UConn (and the Yukon). Not bad for a 14-women squad that's comprised of seven Alaskans, including four who played together at Dimond High School.

Nearly a dozen local businesses are planning watch parties here in Anchorage, and several die-hard fans are even hitting the road to catch this historic game live in Indy. But it won't be easy. Even though Indianapolis bills itself as the "Crossroads of America," it's a mighty trek from Anchorage. 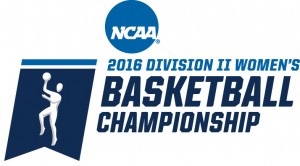 Alaska Airlines and GCI, both corporate partners of Seawolf Athletics, have made it a little easier for fans, though. Before the team even reached the Elite Eight in Sioux Falls (where they won two games over two days, both by 20-point margins), the companies were already in talks with UAA on how to get superfans in the seats. They announced a trip package last Friday and, within hours, the flight had filled, with a pile-up on the waiting list.

On Sunday night at 11:55 p.m., 50 fans-a mix of boosters, alumni, students and promo winners-will depart for Chicago, landing in the morning and immediately boarding a charter bus to Indianapolis. They'll be back in town by Tuesday afternoon. Joining the trip, of course, is the mascot. "I'm really excited," said the man behind the mask. "It's an honor to represent the school."

But there are plenty more than just those 50 fans flocking to the game. "It's a once-in-a-lifetime opportunity. I'm ecstatic," said Teri Cothren, B.A. '98, chapter president for Seawolf Athlete Alumni and a former member of the team. She's seen the Facebook feeds of her former teammates blow up throughout the tournament, and now many are planning to meet in Indy for the game.

Stacie Cepin, B.A. '00, has been streaming online game coverage from her home outside Youngstown, Ohio all season long. She'll be there Monday as well. "Any time you say the words 'national championship,' it means a lot to anybody that's been involved in the program," she noted. "A lot of us have come from different parts of the country, but we have this one pretty awesome connection in UAA." 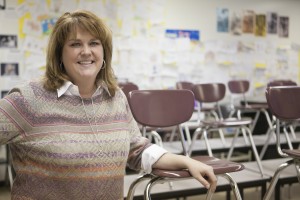 Kelly Mullican Kowal, a language arts teacher at Romig Middle School, is one of several former basketball players making the trek to Indianapolis. (Photo by Philip Hall/University of Alaska Anchorage).

And for a true sign of dedication, take a look at the itinerary of Kelly Kowal, B.Ed. '91 and Rachel Hopkins, B.Ed. '99. Both women are former Seawolf athletes who now teach at Romig Middle School. When they learned UAA was headed to the championship, they decided they had to be there. After much comparison-shopping with mileage plans, buddy passes, etc., they ended up with a three-flight two-airline jaunt via Seattle and Minneapolis into Chicago, where they're renting a car to reach the game.

"Is it crazy that we're going? Yes," Kelly laughed. "It's going to be a whirlwind. But as an alumna, it makes me proud. It makes me glad I was a Seawolf, and I still will always be."

Kelly originally moved here from California specifically to play basketball but, after four years on the team, she found it hard to leave Anchorage. "I live and work here, I'm raising my family here and I think it's important when people go and support what the local university is doing," she noted. "Here we have this new arena, now they're playing for a national title. It doesn't get any better than that!"

If you're not in Indianapolis on Monday, you can still catch the game here in town. The UAA Alumni Association will be at Buffalo Wild Wings in Midtown with plenty of Seawolf swag on hand, and the game will screen all over the city. Click here for the full list of restaurants and bars showing the game.

Wherever you are in #SeawolfNation, we hope you'll follow along as the women's basketball team looks to secure UAA's first national title at 3 p.m. EST, 11 a.m. AKDT on Monday.