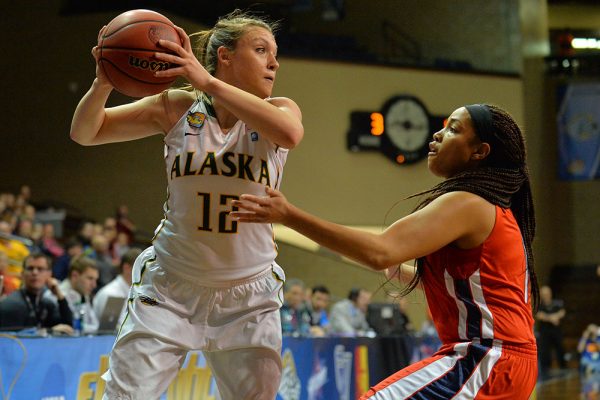 Imaginary conversation: 'Oh, so you want this ball? ' says hard-driving Jenna Buchanan in an Elite Eight game against Francis Marion. 'I don't think so!' (Photo by Sam Wasson/UAA Athletics)

If metaphors could define people, Jenna Buchanan's would be "hard work."

This Seawolf basketball guard came to UAA from a high school career in Galena, Alaska. Anybody who's anybody in this great state knows rural basketball here is hot, hot, hot. So Jenna jumped from the sizzling rural frying pan into UAA's flame-throwing fire pit, as ready as she could be.

Proof is in the record. The 2015-16 women's team made Seawolf history. They drove their team bus (figuratively, wink) all the way to the NCAA Div. II national title game April 4 in Indianapolis. With a 78-73 uphill fight against undefeated Lubbock Christian, the 'wolves fell just shy of the first team national title in school history. Nonetheless, these athletes played spectacularly, thrilling both Anchorage fans watching big screens at home and those-including Spirit and Galena and UAA friends-who trekked the thousands of miles to H-O-W-L  for the green and gold at Bankers Life Fieldhouse.

Of course Jenna was on the boards there, pushing as tough as she always does, securing seven hard-won points in the national match-up. While this tale is more about passing along insights from a UAA Scholar-Athlete than it is a straight sports story, if you love numbers and facts, check 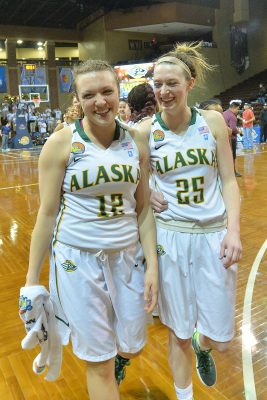 out the team's season finale story on GoSeawolves.com.  There's plenty of data to absorb there, but before you click away, scroll to the subtitle "Splash Sisters," a reference to Jenna and team mate Jessica Madison, storied as this season's most prolific three-point duo in NCAA Div. II.

There are many sources for Jenna's "hard work" ethic, not the least of which is being born to two basketball-coaching parents. Mom and dad played sports, and grew up to become educators. So naturally, along the way, they also coached boys and girls high school basketball teams. Jenna literally grew up on small planes traveling around Alaska with her parents' teams. She remembers an early and favorite babysitter, Andrea Durny, who played ball for UAF. Eventually, though, Jenna was the traveler-not as Coach's daughter-but a player in her own right.

Growing up in Galena

Jenna says she loved growing up in this rural river community.  "It's nice there, a small community. Everyone supports one another, especially in basketball," she said.

Some of that support meant growing up with community fundraisers intended to help local kids afford summer sports skills camps. Last year, it meant friends from Galena actually filling seats in Indianapolis, there to cheer on their home girl and the whole Seawolf squad.

When I caught up with Jenna in late May, she'd literally just landed back in Galena for the summer. There, she'll work construction, a familiar way to earn summer money before returning to UAA for her final year-this time with no basketball on the agenda. But while in Galena, there will be plenty of time to track down her favorites-salmon and moose.

"I'm heavy into hunting and fishing," she said. "It's just part of what we do out here." Her family will seine on the Yukon to fill their smokehouse. Later in the summer, moose hunts become group endeavors. With a family this skilled and active, Jenna learned early how to filet fish and butcher and pack moose.

Growing up in rural Alaska has convinced this early education major that she wants to return, permanently, to teach in a rural school. Her dream job? "At the moment, it might be teaching second grade," Jenna said. "But I've done a lot of work observing in preschool classrooms, and I enjoyed that. So I'm not super sure. I like all ages. But I do know that I'll teach in rural Alaska and not in the city. I know that for sure."

Every high-performing athlete digs deep for the grit to keep going-to keep training, keep running, keep crunching, keep shooting baskets in the gym. I wondered who helped Jenna dig that deep. She  points directly to family.

"They are really really supportive," she says. Even when it wasn't easy. She recalls all the summer trips to Montana to visit grandparents, missed by Jenna, who instead was honing her athletic skills at summer work out camps. "I was always traveling for basketball."

Her mom's parents lived with the family in Galena for awhile. "My grandpa played baseball, and he was big into sports. He'd give me his spot advice. Plus, everyone in Galena supported high school basketball. They all just wanted to see you succeed." 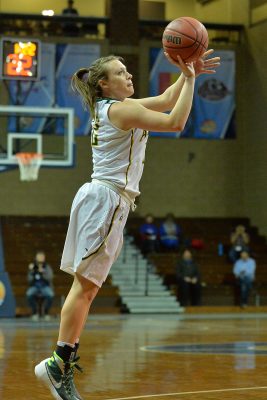 This year, her final year on the court for UAA, family made it into Anchorage as often as they could to see her play. While her dad was still working in Galena, her mom accepted a position at Houston High School-which meant she made it for almost all her daughter's home games. "It was really nice  having her here  all year-and Dad was able to get in for a lot of games, too." Her dad's parents even lived in Anchorage for a month this year, just to catch as many games as they could.

Yes, the Buchanans are one proud family, with good reason.

When the going gets tough

One thing Jenna wanted to emphasize is that she has worked-hard-for what she's earned.

"I wouldn't say I'm the most athletic; I can be clumsy. I do have a lot of natural ability-both my parents played. But it took a lot of hard work, countless hours in the gym and a lot of basketball camps and traveling."

And that was all before college. "In college, it's even more hours in the gym!" she said.

She cautioned high school athletes to be careful setting their sights on a college team, and then thinking they've "made it" when they arrive on campus. They may breathe a sigh of relief, she says, but the hard work is just beginning.

"How well you do, whether you set records and make a name for yourself at the school and reach your goals," that's what it's about in college, she said.

Her own transition from Galena to UAA was a tough one. "I was soooo homesick that first year! I was calling home, maybe five times a day!"

Being a part of the basketball team was a huge safety net. "I automatically had a group here. I belonged," she said. And getting past that first transition year made all the difference for her. Still, balancing school and sports was harder than she'd anticipated.

"You don't know what hard work is...and you don't know what time management is, until you get to college and you're playing college ball," she said. While dedication to the team gave her life lots of structure, the traveling complicated it. 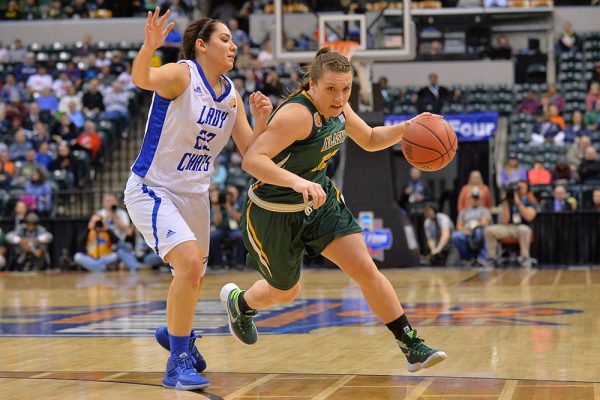 Jenna goes around in a game against Lubbock Christian. (Photo by Sam Wasson/UAA Athletics)

But what did we say about Jenna? She's a hard worker, and finished her year with a 3.62 GPA.

"Basketball has helped me in a lot of ways academically in college. I had a set schedule. I had to get things done," she said. "I wasn't 'on my own time.' I had certain guidelines to meet every semester so I could keep playing..."

Jenna is 21, and has twin siblings-Evan and Sarah, 19- following in her higher ed footsteps, followed by a 6-year-old adopted sister, Ajanae. While the twins are headed to different colleges next year, they still sought out advice from their big sister.

"I was telling my brother a lot of anything you do has to do with the relationships you build. So I told him, 'Go find those people.. That's where you find the opportunities... to bring your education to the next level, maybe open up a job for you in the future. Any field you go in to, it's all about building those relationships."