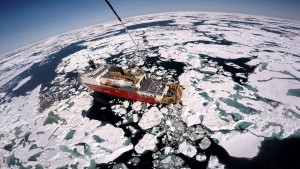 A GoPro camera attached to a balloon captures this view of the U.S. Coast Guard Cutter Healy when UAA researchers Jeff Welker and Eric Klein were aboard, to "sniff" out carbon with a specialized isotope analyzer. (Photo courtesy U.S. Coast Guard)

SEATTLE - The crew of Coast Guard Cutter Healy will depart Tuesday, June 7, from its homeport at Pier 36 for a four-month deployment to the Arctic Ocean to carry out scientific research.

The Healy crew will primarily conduct three missions focusing on the biology, chemistry, geology and physics of the Arctic Ocean and its ecosystems, as well as perform multi-beam sonar mapping of the Extended Continental Shelf.

For the first mission, the crew will work with 46 researchers from the National Oceanic and Atmospheric Administration and University of Alaska Anchorage. The mission will employ the remotely operated vehicle Global Explorer, net trawls, bottom cores and conductivity, temperature and depth casts to assess the biological diversity of the Chukchi Sea. The team of scientists will use cutting-edge technology to identify and document the species living in this poorly understood and rapidly changing region.

The crew will also deploy an array of acoustic bottom moorings in support of researchers from Scripps Institute of Oceanography and the Office of Naval Research. The moorings will collect data on how climate change and decreased ice coverage is affecting the Arctic Ocean.

The final mission is funded by NOAA in support of the State Department and the White House Office of Science and Technology. Researchers from the University of New Hampshire will use multi-beam sonar mapping and bottom dredging in the Bering Sea and Arctic Ocean to further support the demarcation of the ECS.

This is the 10th ECS cruise for Healy and the eighth carried out in cooperation with the Canadian Hydrographic Service. This work will directly support the United States' claim for natural resources found on or beneath the ocean floor.

The Healy is the nation's newest and largest high-latitude icebreaker. The cutter is 420 feet long and has extensive scientific capabilities. The cutter has a permanent crew of 87 and is capable of other operations such as search and rescue, ship escort, environmental protection and the enforcement of laws and treaties in the Polar Regions.­

For more information about Healy and its missions, please visit uscg.mil/pacarea/cgchealy or icefloe.net. This story originally appeared on usgcnews.com.

Read more about UAA partnerships with the Coast Guard: