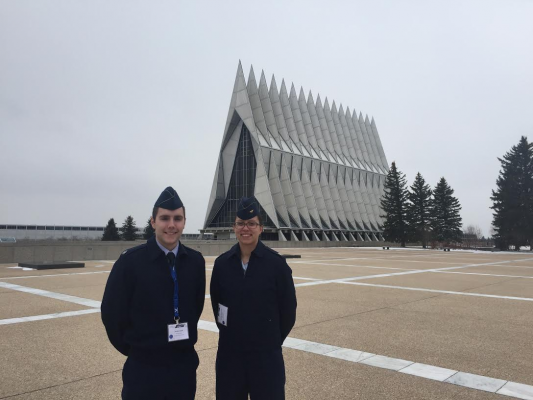 University of Alaska Anchorage students Aubrey Swammy and Jordan Clark joined Air Force ROTC to serve their country and grow as leaders. This year's National Character and Leadership Symposium in Colorado Springs, Colo. gave them an opportunity to do just that.

The annual event, held at the United States Air Force Academy in Colorado Springs, brings together an array of scholars, military leaders, corporate executives and world-class athletes to discuss the power of character and leadership. This year's theme, Warrior Ethos, gave the cadets an opportunity to reflect on what it means to be a member of the profession of arms.

Clark and Swammy were selected from among their peers because of their outstanding performance at UAA's ROTC Detachment 001. "These are two of our best and brightest," noted the detachment commander, Lt. Col. Matt Beer, "and most importantly, they have the kind of character that will make them superb leaders in our Air Force."

"Captain Yellin was my favorite speaker," said Clark. "His perseverance and humanity were great examples to take with me."

Cadet Swammy came away with a new understanding of what it means to be a warrior. "Everyone can be a warrior for something; like going the extra mile, doing things the right way when it hurts, and holding yourself to a higher standard."

The trip to Colorado Springs also gave the cadets a chance to reflect on what makes ROTC and UAA so special. "The best part of attending was talking to other cadets and seeing how different life at the Academy is in comparison to ROTC," said Swammy. "UAA is so personal. It's a great feeling to know other people who are on a similar journey."