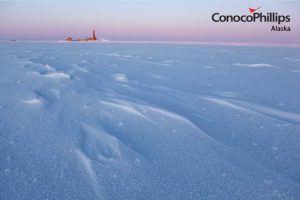 Faculty and students at the University of Alaska Anchorage continue to make important strides in Arctic research, thanks to the support of ConocoPhillips Alaska. UAA announced today that five proposals have been selected to receive ConocoPhillips Arctic Science and Engineering Endowment awards totaling more than $440,000.

Created in 2008 with a $15 million gift from ConocoPhillips Alaska, the endowment provides annual support to Arctic science and engineering programs and research at UAA. The endowment is the largest in the University of Alaska system.

To be selected, projects must promote and grow the fields of Arctic science and engineering, have a significant likelihood of major scientific or engineering impact and strongly articulate connections to community and industry. Programs, research and activities that are inclusive of Alaska students, communities, projects and opportunities are given priority. The endowment aims to create sustainable projects that have a continued impact on Arctic science and engineering research.

The five winning projects for fiscal year 2018, selected by a UAA committee through a rigorous evaluation process, include:

Due to thawing permafrost, ground subsidence poses a constant threat to the integrity and safety of Arctic infrastructures such as oil wells, pipelines, buildings, railways, highways and bridges. This project proposes a remote sensing method using radar to monitor even very small changes in ground subsidence due to permafrost thawing.

Corrosion detection and quantification is important to Alaska's oil and gas infrastructure. This project focuses on designing and testing aerial surveillance and computer processing systems.

Building upon a current project that uses hydrocarbon modeling to assess oil spill response strategies, this project evaluates the effects of response strategies on marine microbial populations involving biodegradation. The project will revise a UAA ecotoxicology course to include an emphasis on oil spill prevention and response.

Arctic communities face some of the highest energy costs in the United States. This cost has led to demand for renewable energy sources, including wind, tidal, geothermal, hydro and solar. This project aims to develop an Arctic Grid Modeling tool to provide a common methodology for communities to assess grid performance and cost-effectiveness.

Geologic insights into the history of the North Slope, known to geologists as the Beaufort Margin, are critical to future development of Alaska's Arctic resources. This project will evaluate the tectonic history of the North Slope and provide integrated structural, stratigraphic and petrophysical analysis of the region. The project will support graduate research and will be integrated into undergraduate teaching.

For more information about the ConocoPhillips Arctic Science and Engineering Endowment, please visit uaa.alaska.edu/chancellor.
ConocoPhillips has been leading the search for energy in Alaska for more than 50 years and is also committed to being a good steward in communities where it operates, including long-standing support for the University of Alaska system. ConocoPhillips' historic $15 million contribution to UAA in 2008 brought the company's total support to the university system to more than $35 million since 2000.