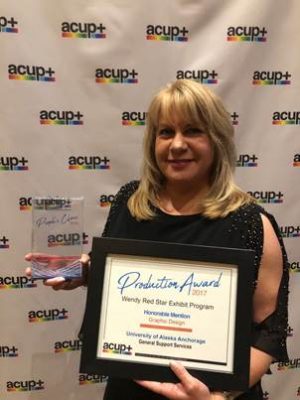 Kim Stanford, director of General Support Services, represented UAA at the Association of College and University Printers (ACUP) conference in early May. The three-day conference concluded with the ACUP Awards ceremony, where Stanford had the honor of accepting two awards on behalf of the UAA Copy & Print Center:

UAA is the inaugural winner of the People's Choice award, which was open to all project submissions across all categories (including digital, stickers/decals, large format and graphic design). Following a vote by all conference attendees (representing higher education and K-12 printing presses in the U.S., as well as partners in the U.K. and Canada) and industry vendors, Danny Kennedy's Wendy Red Star Exhibit Program emerged as the favorite out of hundreds of submissions.