Accidentally on purpose: How The Northern Light’s executive editor found her UAA major and career 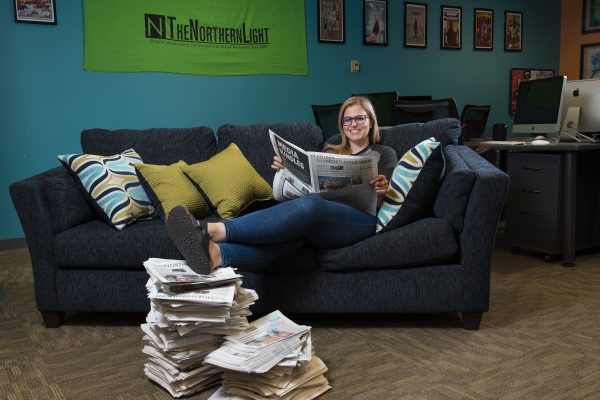 "Initially when I applied to UAA, I didn't really want to go to college because I wasn't really sure what I wanted to do," Samantha - Sam for short - Davenport said. Davenport is the executive editor for The Northern Light (TNL), the University of Alaska Anchorage's student-run newspaper and is on the tail end of finishing up her senior year. She'll be graduating this December with a double major in journalism and political science. "I knew I wanted to go eventually, but I was pretty young and just had no idea what was in store for me."

Education was important in Davenport's family, her father went to UAA later in life, after working on the Slope for many years, and earned his teaching degree from UAA. Her brother attended the prestigious, engineering-focused Colorado School of Mines. So Davenport enrolled at UAA, declaring herself an arts major just to get the ball rolling.

"My dad almost had a heart attack when I walked across the school at graduation, and they announced I was going to school for an arts degree," Davenport said laughing.

But after a semester of trying a few different majors, theater and psychology and getting involved in campus life, she eventually found her tribe - and in the process, discovered the career she didn't know she'd always wanted. Although, it was completely by accident. 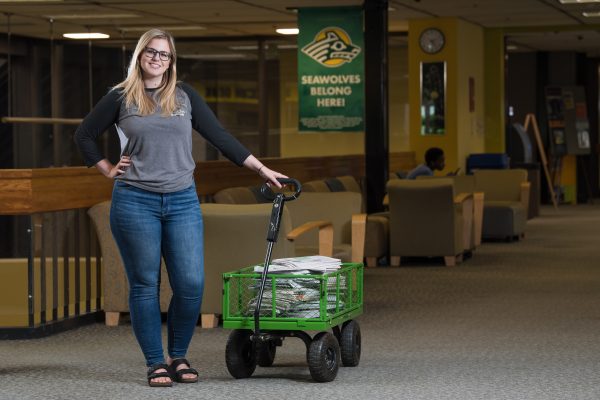 "I'd always liked writing, but I'd never thought of it as an actual career," said Samantha Davenport, UAA senior who will graduate this fall with a double major in journalism and political science. (Photo by James Evans / University of Alaska Anchorage)

Like most college students, Davenport was not flush with cash, so she hunted down a job on campus and stumbled across TNL. Davenport applied for the assistant arts and entertainment editor position not really knowing much about working at a newspaper, other than that she enjoyed writing.

"I applied to TNL on a whim," she said. Her friend knew the former editor at the time and told her he'd put in a good word. The application requested a writing sample, and she submitted a story she'd written in high school about her school's new rock gym, which had been published in the Mat-Su Valley Frontiersman. It impressed the TNL staff enough to land her the job and get her foot in the door to what would quickly open up a whole new career path she never really knew existed.

"I'd always liked writing, but I'd never thought of it as an actual career - I never even actually thought about journalism as a career until I started working here," Davenport said. From there, life at TNL moved pretty quickly. About a year and a half after starting, the former editor resigned and Davenport moved into the position.

With her newfound direction, Davenport declared herself a journalism major and dove in, headfirst.

"I started taking journalism classes, and I just think there are some really talented people in our department, like Elizabeth Arnold, who has worked for NPR - she is just my hero," Davenport said. "I think having people you can aspire to and have had real-world experience and show you what you can do has really motivated me."

Davenport feels lucky that UAA's Department of Journalism and Communication program not only provided her with excellent teachers like Arnold and Paola Banchero but also the opportunity to work with local legends, like former Anchorage Daily News columnist and Atwood Chair Julia O'Malley. O'Malley helped Davenport secure her first internship with ADN, giving her a glimpse of a reporter's life in a busy newsroom.

"That was really exciting because my dad still subscribes to the paper - he reads ADN every day," said Davenport. "He always read Julia O'Malley's column, so it was kind of like coming full circle."  She also interned at Alaska Public Media to broaden her journalism education and learn the radio side of the industry. 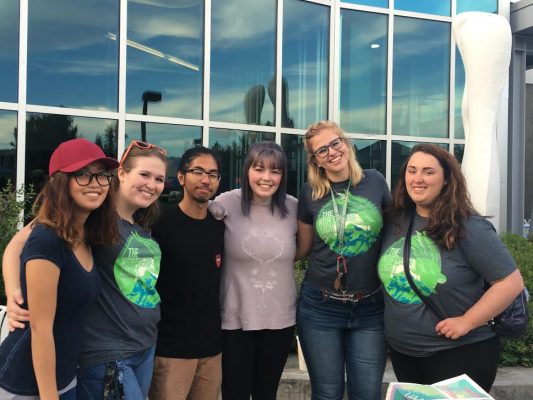 Davenport out and about on campus. (Photo courtesy of Samantha Davenport)

"I wanted to do something outside of print," Davenport said. "I realized that you really need to be multifaceted in this job and that just writing really doesn't cut it." Davenport's resume is exactly that, her experience at TNL the past four years has had her pitching in on tasks from selling ads to delivering papers across campus, and everything in-between. In addition to helming the student newspaper, Davenport's also freelances. She was recently published in Alaska Magazine.

"Ultimately this job has taught me how to work with people, how to problem solve and how to do things that aren't in my job description, which is OK," Davenport said. "I think the smallest staff we've had here is eight, so I've learned how to do just about everything. You name it, I've probably done it."

The Spenardian, a TNL affair

On a Thursday evening in March, folks crammed into the Church of Love for the highly anticipated magazine launch of The Spenardian, a hyper-local magazine about the people, places and spaces of the well-known Anchorage neighborhood.

"It was crazy successful," Davenport said. "We had to limit people coming in and out, which was nuts. It was really exciting to see so many people who were excited about it."

The idea had started the summer before with TNL copy editor and UAA journalism student, Victoria Petersen, who now writes for the Kenai Peninsula Clarion. Petersen had created a blog called The Spenardian as her senior capstone. Davenport, who had just moved to the neighborhood was eager to jump on board and get involved.

This spring, Davenport decided to take the blog (with the help and blessing of Petersen) to the next level and turn it into a magazine for her senior capstone project. Davenport and Petersen brought on two other TNL staffers, Levi Brown, their layout editor and recently graduated journalism student, Young Kim as the media editor. Davenport said neither she nor Petersen imagined the huge community response they'd receive with the magazine.

"We raised over $3,000. We were shooting for $1,000 because that's what printing costs were and had no ads for the first issue," said Davenport of the launch party. The day after she and Petersen distributed the magazine to local businesses, they were already getting calls for more copies. 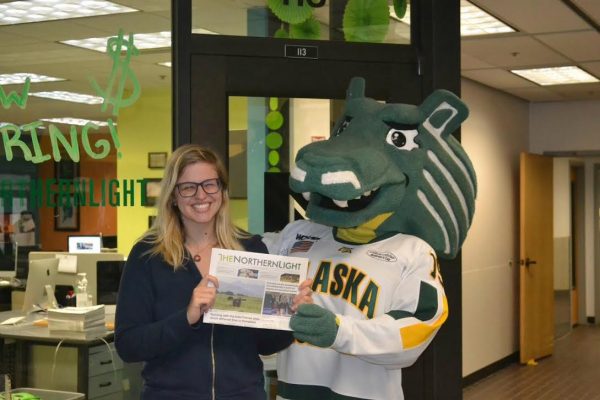 Davenport hanging with Spirit outside the TNL offices. (Photo courtesy of Samantha Davenport)

"The Spenardian was something unexpected that just worked out," said Davenport, who said the four-person magazine team just wrapped up its second issue and sent it off to the press. "It's fun to see so many people coming together - whether they want to write, take photos or whatever - they just want to be a part of it."

Davenport said for the time being they'll be printing three times a year. She is happy to keep the magazine as a "passion project." Maybe someday it will grow into something more than that, but for now, she's just looking down the road toward graduation and open to the possibilities of life after UAA.

"I think when I first started here, I didn't really expect a lot, but from this job, I've gotten a lot," Davenport said of her four-year run at TNL. She's gotten to travel, has had amazing internship opportunities, helped create a magazine, which was an overnight success and has really made the most of her time here at the university.

"One thing I always tell people, you need to get involved," Davenport said. "Whether that's getting involved in a club or student organization, working in a department or even starting your own club - do something where you can meet new people and make connections in the community."

"Accidentally on purpose: How The Northern Light’s executive editor found her UAA major and career" is licensed under a Creative Commons Attribution-NonCommercial 4.0 International License.
July Archive