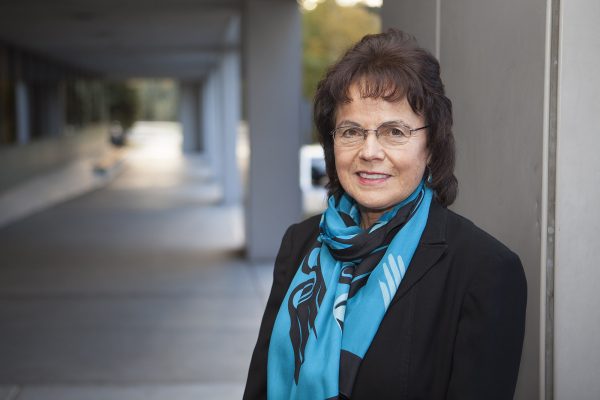 Dr. Jeane T'áaw xÍwaa Breinig will receive the 2018 Edith R. Bullock Prize for Excellence for her outstanding contributions to the University of Alaska.

"Edith Bullock made a generous contribution to establish this award and showcase the extraordinary achievements of individuals on behalf of the UA system," said UA Foundation Board of Directors Chair Alex Slivka. "Dr. Breinig's efforts to expand diversity within the University of Alaska through curriculum, research and leadership embody the excellence that Mrs. Bullock wished to recognize."

Breinig was one of the first Alaska Native tenure-track professors hired at UAA, arriving in 1995. Upon her hire, she developed curriculum with an emphasis on Alaska Native literature and studies. She has worked to increase diversity and inclusion in the University of Alaska's culture, particularly by developing and promoting Alaska Native and indigenous research and creative activity.

"Her courses have enabled students to engage meaningfully and transformatively with course content. Indeed, as one student stated, 'it is the first time I've learned anything much about Alaska Natives, and I've lived in Alaska my whole life,'" wrote Jennifer Stone, UAA associate professor of English in her nomination of Breinig.

Breinig is also well known for inspiring learning through her extensive record of university and community service. She recently facilitated, and is now assisting to implement, UA's first Diversity & Inclusion Action Plan, completed in 2017. She is a co-founder of the Alaska Native Studies Council, which was UA's first Alaska Native cross-institutional group consisting of faculty from UAA, the University of Alaska Fairbanks, the University of Alaska Southeast and IỊisaġvik College. The council works to develop and include indigenous curricula, pedagogy and research in Alaska's universities.

She has served on boards for a variety of institutions, including the Alaska Humanities Forum, Kavilco Incorporated, Kasaan Haida Heritage Foundation, Rural Alaska Community Action Program, Sealaska Heritage Institute and the University of Alaska Press; she also serves as the Alaska regional liaison for the Ford Foundation Diversity Fellowship Program. Breinig has also served as a visiting associate professor of English at the University of Alaska Southeast and as a Haida language associate at the Sealaska Heritage Institute.

The UA Foundation raises, manages and stewards private donations for the benefit of the University of Alaska.