Is voting a privilege, a right or a responsibility? That's the question students answered for UAA's inaugural Democracy and Civic Action Week essay contest.

Judges awarded the Civil Liberty Grand Prize to Phillip Granath, undergraduate English major at UAA, for his essay, "Bullets And Ballots: Voting Is Our Responsibility." Granath's essay recounts his experiences in Iraq as the nation prepared to hold its first democratic elections in nearly five decades. As the contest's grand prize winner, Granath received $500 and had his essay published on Forbes' website. Head here to read the essay.

Congratulations also go to UAA student Nicholas Schwantes, winner of the Informed Voter Award, and Chugiak High School student Amber Brady, winner of the Youth Voice Award. Nicholas and Amber each received a $250 prize along with the award, thanks to a sponsorship by the League of Women Voters Alaska. 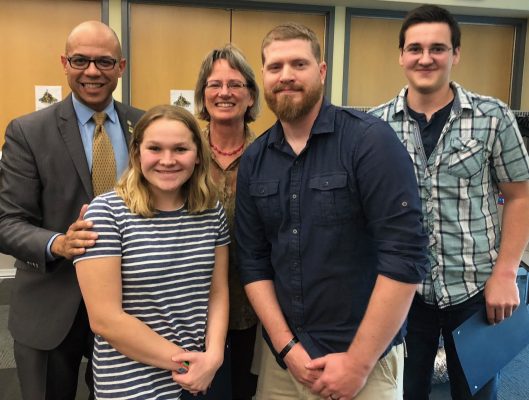 Special thanks go to the community leaders who volunteered their time and expertise to serve as contest judges: