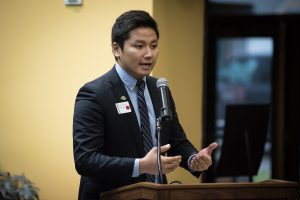 For USUAA President Geser Bat-Erdene, English is his fourth language. The 26-year-old finance major and French minor from Erdenet, Mongolia, is also fluent in Mongolian, Russian and Japanese. By the time he graduated from high school, he'd already lived abroad in Russia and Japan. The highly motivated Bat-Erdene knew that after spending his teen years abroad, his next stop would be the United States to pursue his university education. So how did this well-traveled, multilingual international student land in the far north?

"An older student from my Russian school - one of them was involved with UAA - shared with me that if you're looking to pursue a degree in the United States, UAA is a great place," said Bat-Erdene. Additionally, the university's sister-city program, which coordinates with 15 countries across the globe, allows students from all over the world to study and receive their higher education at an affordable in-state tuition price. "My friend told me there would be many opportunities and encouraged me to look into UAA and that it would be great."

Receiving a higher education is extremely important to Bat-Erdene, and his drive to succeed and do well became so much more important after the passing of his father.

"He told me, 'It doesn't matter what you do - but you need to get an education,'" he said. And Bat-Erdene has. He's made the most of his time at UAA, studying hard, making connections and achieving the goals he set out for himself. "I knew from the beginning that it wasn't going to be easy and that there would be challenges, but from the beginning, I've felt very welcome."

When Bat-Erdene first arrived at UAA, he didn't really know what to expect and was focused on his studies, but his second year in, he knew he needed to break out of his shell and get involved on campus.

"I realized that studies and getting an education were great, but that I also needed to learn other important skills, too, like meeting new people and working," he said. Student government and being involved was something he'd always been interested in, from the time he was in middle school in Russia to high school in Japan. He said that he ran for vice president at his Japanese school - which was unheard of because international students didn't run because of their "outsider" status. He narrowly lost that election, but the experience gave him confidence and piqued his interest enough to know that he liked being involved with an organization at a larger level. 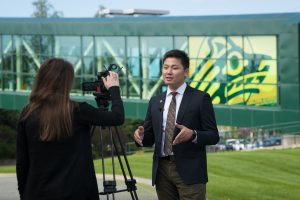 "Although I lost that election, it was a great experience for me," he said. "When I was a sophomore here I didn't know about student government at UAA - but I knew that I wanted to get involved," he said.

That year, Bat-Erdene also sat himself down and listed out the goals he wanted to accomplish by the time he graduated from UAA - which, at this point, he's making good progress on.

"I remember writing down notes of my goals of what I wanted to do before graduating. The first was to find and join student government. The second was to establish a Mongolian students club. The third was to do an internship - because it's challenging for international students to do an internship - and there were a couple of others," said Bat-Erdene. "I still find it amazing that the goals we write down tend to happen." 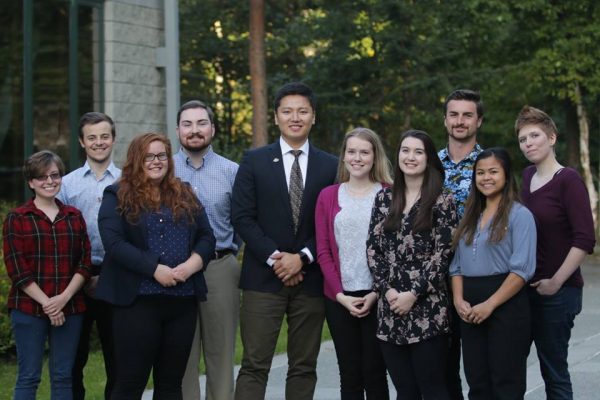 In addition to pursuing a finance major and a French minor and being heavily involved in USUAA, Bat-Erdene founded the Mongolian Students Society two years ago to promote the culture, education and history of Alaska and Mongolia. To his surprise, the organization ended up being much more than just a student club and he was able to host several major events on campus.

"We ended up hosting student focus groups with the Mongolian ambassador to the U.S. from Washington, D.C. and the ambassador, along with five Mongolian parliamentary members, ended up visiting Alaska," he said. Bat-Erdene said this past July, he also helped host the president of the National University of Mongolia from the University of Mongolia after a memorandum of understanding was signed last November. "Us being here and working to be an officially recognized club was definitely worth it."

Bat-Erdene said that his experience getting UAA's Mongolian student club off the ground solidified his belief that one person can make a pretty big impact, and that you just never really know what opportunities are available to you until you put yourself out there and try.

Home is where the heart is

For Bat-Erdene, his goal has always been to return home to Mongolia, to make a difference in his country. He knows it's not the popular life choice - many Mongolian youths leave the country and very few come back - but he feels like if he doesn't return, who will?

He said many young people his age don't want to return to Mongolia because of the country's problems. Bat-Erdene recognizes this but feels a heavy responsibility to be a part of the leadership in the country to help turn things around. "If you're not willing to come back and be a part of the solution, who's going to do it? If you wait for politicians or anybody else to do it, and keep finding excuses, nothing's going to change."

For Bat-Erdene, despite having many goals in life, his biggest is to make a difference wherever he is, in whatever job or role he's in.

"You can succeed anywhere if you dedicate yourself to something that you truly want to do," he said.