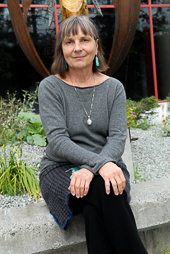 Jill Flanders Crosby is a Professor and the Dance Program Coordinator in the Department of Theatre and Dance, University of Alaska Anchorage. She holds an Ed.M and Ed.D from Teachers College Columbia University and actively performed and choreographed in Anchorage and at UAA for over 30 years. She choreographed for and performed with Moving Company North, Alaska Contemporary Dance Company and Alaska Dance Theatre. She also appeared as a guest artist with XSIGHT! Performance Group of Chicago and appeared at the Morningside dance Festival in New York City in 1991. She has taught jazz dance classes in Havana, Cuba with DanzAbierta. She also taught at the University of Ghana, West Africa.

Dr. Flanders Crosby received a 1998 Fulbright research grant for her work in Ghana and also traveled to Cuba to research the folklorization of traditional religious dance, the links between the Ewe people of Ghana and the Arará people Cuba and elder oral histories in Perico and Agramonte Cuba. She is published in the CORD, Etnofoor and Southern Quarterly journals, and contributed a chapter to the edited book Making Caribbean Dance on her work in Ghana and Cuba. She is the project director and principle investigator for a multi-disciplinary and collaborative art installation Secrets under the Skin that premiered in Havana, Cuba in December 2010 with later showings in Anchorage and Homer Alaska and San Francisco in 2013. The installation and fieldwork data upon which the installation was built is in progress of turning into a book for University Press of Florida. She also researches jazz expression and contributed two chapters for an edited jazz dance reader on jazz dance history. She is currently researching artistic form in Cook Islands dance.

Crosby, Jill Flanders (2010). “Secrets Under the Skin: They Brought the Essence of Africa.” In Making Caribbean Dance: Continuity and Creativity in Island Cultures Editor, Susana Sloat. University of Florida Press.

Crosby, Jill Flanders (2008). “West African Music and Dance in the United States and Cuba. Looking at Social and Concert Jazz Dance and at Cuban Religious and Social Dances. Dancing at the Crossroads 1(1): 1-28.