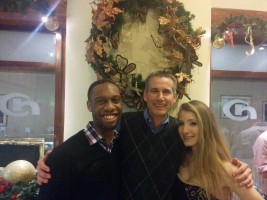 With the ringing of the New Year, two debaters from UAA found themselves among the elite few who would qualify to compete in the elimination rounds at the World Universities Debating Championships, hosted by the University of Macedonia, Rhetoric Club of Thessaloniki and Debating Society of Greece, in Thessaloniki, Greece, from Dec. 27, 2015, to Jan. 4, 2016.

The annual tournament to crown the world champion of intercollegiate debating--known colloquially as "Worlds"--attracts roughly 400 teams from more than 195 institutions across 70 nations. The competition features three days of preliminary rounds from which only 48 teams with winning records advance to the elimination phase of the competition. This year, the team of Johanna Richter and Jonathon Taylor, who recently won the Seattle University Worlds Debate Tournament, earned a winning record that placed them thirty-third, securing themselves a spot in the elimination phase among the top 10 percent of all teams competing at this year's championship.

Only seven other teams from the United States advanced to the elimination phase (also known as "breaking"), including a team each from Princeton, Columbia and University of Pennsylvania, and two teams each from Harvard and Yale. UAA was one of only two public institutions from the U.S. to advance. The rest of the 48 teams to advance include a large contingent from Australia and the United Kingdom, as well as a handful of teams from Canada, New Zealand, Malaysia, Israel, Europe and South Asia. For a complete list of the break, please visit: thessaloniki2016.com/the-break.

Richter and Taylor join a small group of Alaskans who have also made the break at Worlds on behalf of UAA. Since attending the World Universities Debating Championship every year beginning first in 2005, UAA has had only four other teams advance to the elimination phase of the championship, an incredible feat. In 2012, the team of Colin Haughey & Brett Frazer advanced; and in 2011, the teams of Amy (Parrent) Ainslie & Brett Frazer along with Vasilios Gialopsis & Amie (Stanley) Collins advanced. In 2007, the team of Chris Kolerok & Tom Lassen advanced the furthest of any Alaska team at the championship, earning semifinalist honors as one of the top eight teams in the world.

Competing against Pennsylvania, Columbia University and Cape Town University of South Africa in the partial double octofinals, it was the team of Columbia and Penn who were chosen to continue on in the tournament. A team from Harvard University would eventually go on to be named the World Champion. Both Seawolf debaters further distinguished themselves by placing well in the top of the field as individual speakers. Jonathon Taylor was ranked 57th out of the 796 speakers present and his partner, Johanna Richter, placed 89th.