'I want to strengthen the fabric of Unangan lives' 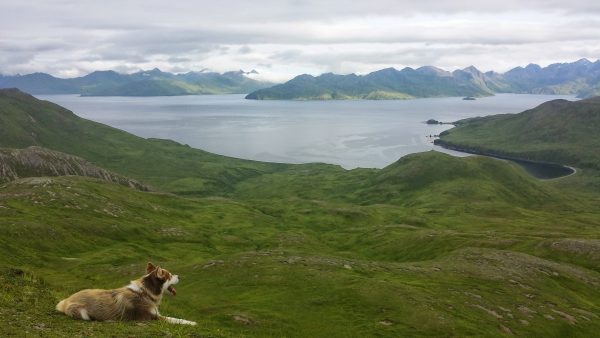 While Jana V. Lekanoff, a UAA anthropology student (and her older brother, Nicholai Lekanoff, a UAA mathematics student) both were born in Anchorage, they grew up on Unalaska Island, part of the Aleutian Chain, and think of Unalaska as home. "I truly love the beauty of our Aleutian landscapes," she said. "My favorite memories include taking boat rides and going to our camp during the summers." Her father and his parents were born there, and have lived their entire lives there, while her mother came to Unalaska with her family in the 1970s. Jana won the 2016 Second Bridge Scholarship Award, and will be using funding from that award to research the shifts between Unangan, Russian and English place names on Unalaska. One example: Capt. James Cook reported that Samgan Udaa meant "bay of snouts", which evolved into Angliiskii Bay, a name derived from Cook's winter stay in the bay. Now, that place is known as English Bay. 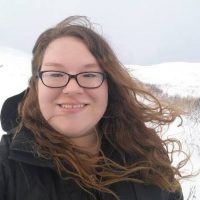 When did you first become aware of the history of the island?

The history of Unalaska Island is carved into the landscape. There are remnants of World War II Quonset huts and bunkers scattered in many of the valleys and atop many of the mountains near Unalaska, especially near town. There are also large and deep depressions that are located on spits of land that date back to Unangan house pits called barabaras by the Russians, and midden sites located all over the island.

When I first started taking long hikes with my dog, I became interested in who had created the well-established trails or crumbling roads we were following. Finally, in the summer of 2015, I spent two months at a place called McLees Lake for a fish technician job. What is interesting about this place is that it actually has at least four other names. The Unangan, or indigenous (Aleut), people referred to this bay as Tachiqala, which referenced the placement of the bay at the north end of the island. Russian colonialists referred to this place as Vesselovskii. Officially this bay is known as Reese Bay, while the lake is known as McLees Lake. Finally, local people don't really use any of these names-we call this bay Wislow, which is the name of a small island located within the mouth of the bay.

Was there a point in your life when you first wondered why places on the island had the names they had?

The Russian colonial period of history on Unalaska Island is still reflected today within the Russian Orthodox religion, which includes traditions such as baking kulich-Easter bread-and going starring during Russian Christmas time. Many Unangan people here in Unalaska also have Russian heritage.

The World War II era is also heavily represented in Unangan culture through the trauma inflicted upon Unangan people who were forcibly relocated to Southeast Alaska in the 1940s. This particular historical trauma has been very damaging to Unangan culture because of the many elders and young people who died during the forced relocation and the trauma the experience inflicted upon those who survived. 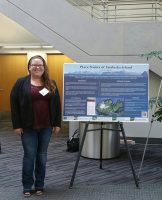 Why did you decide to attend UAA? What did you initially choose to study?

I decided to attend UAA after having a tough time in my life. I decided to go back to school and finish my bachelor's degree, as I had always known I was supposed to do. I first chose to study social work, but quickly became interested in anthropology and the faculty in that department.

After taking an anthropology course and doing the readings for that course, I realized anthropology could be a powerful tool that could help places like Unalaska by using both scientific and traditional or indigenous methods.

When and how did you first learn of the Second Bridge Scholarship Award, and why did you apply?

I first heard of the Second Bridge Scholarship Award when a classmate of mine won the award during a prior year. My advisor, Dr. Medeia Csoba DeHass, had also mentioned the opportunity during her class, Decolonizing Methodologies. Judith Owens-Manley at the UAA Center for Community Engagement and Learning was extremely helpful when applying for the award and has served as a valuable sounding board for my project over the past semester. I also appreciated the opportunity to present my project during a forum Judith and UAA CCEL organized in April.

What does "decolonization" mean?

My favorite example of what it means to decolonize something would be the many archives that hold research done on Unangan or Aleut people by outside researchers. We have had many people come to the Aleutians to do research, but often that research is designed to serve the researcher or the institution they represent. The data they collect are then taken out of the community and the research doesn't do anything to help the community. These are "colonizing" methodologies. One way I have "decolonized" research is by going to these archives and getting permission to make the Unangan cultural information available online on my project website. This information is free and publicly available.

Why did you first embark on this project? How did you come up with the idea?

That Decolonizing Methodologies class was very important to me and  shaped the methodologies I have used in my project, Place Names of Unalaska Island. The main project of the class was to develop a research project using oral history traditions and incorporating community engagement with indigenous communities with which we are doing research.

How do you plan to gather the information you need for the project?

I have just had the opportunity to work with UAA's Institutional Review Board to ensure my project uses ethical practices when working with project participants. Sharilyn Mumaw and her team at the UAA IRB have been extremely helpful in getting my project through the review process.

I now have approval to work with participants by recording their oral histories and focusing on memories or experiences in certain places, as well as local knowledge that has been passed down through the generations. I will be using semi-structured recorded individual interviews with approximately five Unangan or Aleut elders and about five interviews with younger Unangan locals and other local traditional land users.

These oral histories and the data I am able to gather during these hours of interviews will be incorporated with data I have gathered from archives and other documents. This information is all being presented on an online project website that hosts a map with place name information, cultural information and historical data such as archaeological findings.

I am hoping creating an intersection between the lived experiences of local people and information gathered by years of colonial merchants, governmental agents and outside researchers will make more information available to Unangan people and residents of the Aleutian region.

When do you hope to complete the project?

I am hoping to add components as I continue my education and turn it into an ongoing and interactive project where other people can add knowledge and learn from other people's local knowledge.

For what will you use the funds from the scholarship award?

I have used the Second Bridge Scholarship Award to pay for airfare to and from Unalaska, as well as purchasing a new camera for taking high-quality pictures for the project website. I will also be hosting a community outreach event later this summer.

What cultural resources have you tapped?

An important component is having a community partner that serves as a representative of the Native community. Collaborating with the Ounalashka Corporation, and especially by working with CEO Chris Salts and executive assistant Lydia Gordon, we are using indigenous methodologies. My project and work only have value if they serve the host community.

What challenges have you encountered so far and how do you propose to deal with those challenges?

Every step has been new and challenging-from garnering support from organizations and asking people to give me their time and knowledge, it has all been a learning experience. I am grateful for all the help I've had every step of the way, from my advisor Dr. Csoba DeHass and other faculty, to my community partner, the Ounalashka Corporation, and other UAA departments, faculty and fellow students.

What role has UAA's Medeia Csoba DeHass played in the development and execution of this project?

Dr. Csoba DeHass has truly pushed me to attain my potential and I value her contributions immensely. Medeia serves as my faculty advisor as we have shepherded my project through the process into implementation.

What responses have you received?

People are very interested in the idea of place names and the dynamic way they play out in Unalaska. Names manifest the shift of power from the indigenous peoples to groups further and further removed from the land and the people. The loss of control over landscape is made literal when you no longer name your land.

When and why did people feel the need to change these names, and how are you learning about the historical circumstances of these decisions to change place names?

I have used several documents from Father Ivan Veniaminov for information about the Russian colonial period in Unalaska, and have relied on Knut Bergsland's Aleut Dictionary for much of the Unangan place names I have found. This upcoming year I am hoping to look into the UAA Archives for more information about the World War II era and the many names that changed during that time.

What is your goal?

I want to strengthen the fabric of Unangan lives. I want our knowledge and expertise in this wild and beautiful environment to be passed down to younger generations. I want to learn more. I want someone to teach me something I didn't know about our beautiful island. I believe through interactions with the landscape and waterways that we earn an opportunity to know ourselves better and become better people. The land offers a shared place of memories our community can bond over-we can all be better connected to each other and our lands. I believe through these activities, Unangan identity can be strengthened and created.

"'I want to strengthen the fabric of Unangan lives'" is licensed under a Creative Commons Attribution-NonCommercial 4.0 International License.
June Archive