Nearly 1,100 UAA graduates prepare to make their mark on the world 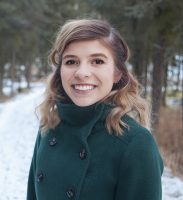 Sophie Leshan will be the student commencement speaker at the 2016 fall graduation ceremony.

The University of Alaska Anchorage celebrates the fall class of 2016 graduates at 1 p.m. Sunday, Dec. 18, in the Alaska Airlines Center. This ceremony honors the accomplishments of nearly 1,100 undergraduate, graduate and professional school students, more than 400 of whom are walking in the ceremony.

"We are proud of our graduates," said UAA Chancellor Tom Case. "On Sunday, they will join the ranks of more than 50,000 Seawolf alumni. We are pleased to celebrate this important milestone that is a testament to their hard work and dedication. We look forward to the positive mark they will make with their UAA education."

Sophie Leshan speaks on behalf of graduating students. Leshan's degree is in early childhood education, with magna cum laude and leadership honors. As a community-engaged student assistant, she worked with College of Education professors Kathryn Ohle and Hattie Harvey to investigate educator perceptions of Alaska's statewide kindergarten-entry assessment. She later received an undergraduate research grant to conduct additional research related to the project. Leshan is a recipient of several awards, including the UAA Martin Luther King Jr. Leadership Award. She has embraced leadership positions within the Emerging Leaders Program, USUAA Student Government, UAA Concert Board and the University General Assembly.

Longtime Anchorage resident Charlotte Fox receives UAA's Meritorious Service Award for her support of artists and her work to advance the role of arts education at the university and throughout the community, state and region. Anchorage philanthropist and volunteer Jo Michalski also receives a Meritorious Service Award for her civic and entrepreneurial leadership, especially for women in business.

"Nearly 1,100 UAA graduates prepare to make their mark on the world" is licensed under a Creative Commons Attribution-NonCommercial 4.0 International License.
December Archive