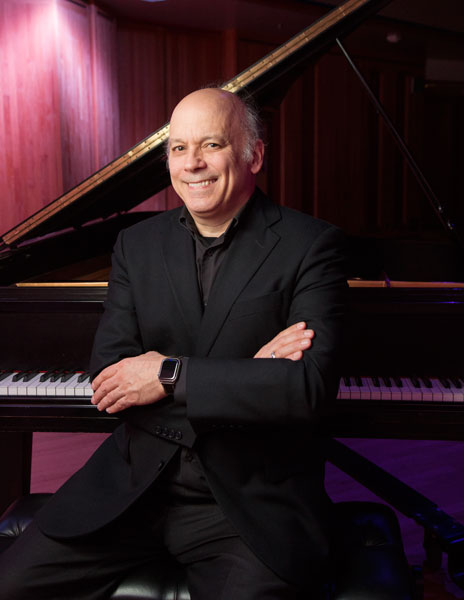 Timothy Smith, who has been described as "A pianist who interlaces grace with bursts of power and color" by the Philadelphia Inquirer, and "an excellent pianist" by Vers l'Avenir (Belgium) is Professor of Piano and head of Piano Studies at the University of Alaska Anchorage. Raised in Seattle, Washington, Smith began private piano studies at age five, and at ten was accepted into the Pre-College division of the Juilliard School. He made his orchestral debut at the age of 15. His undergraduate studies were at the University of Washington in Seattle, with Bela Siki, where Smith received numerous awards and scholarships. He continued graduate study as a scholarship student of Martin Canin at Juilliard where he received his Master of Music degree, and later at the State University of New York at Stony Brook, again with Martin Canin, where he was awarded the Doctorate of Musical Arts in 1985. Dr. Smith has won major prizes and recognition in international competitions, including the Casadesus (5th prize), Gina Bachauer (4th prize), Washington, D.C. International (3rd prize), Queen Elizabeth (Brussels) (semi-finalist), among others. As a winner of the Artists International Competition, Smith made his New York recital debut in Carnegie Recital Hall. He has appeared with many orchestras, including the Seattle and Utah Symphonies, the Palo Alto Chamber Orchestra, as well as orchestras in Anchorage, Japan, and China (see below). Smith has performed on National Public Radio, WQXR-FM (New York), RTB (Belgium), and others. He has given master classes in Japan, Korea, Hong Kong, Taiwan, and China, PRC, and also in North and South America. He has given over 50 concerts in Asia, including many venues in Japan: Tokyo, Osaka, Nagoya, Sendai, Sapporo, and many others, from Asahigawa in the north to Kure in the south. In the U.S., his students have received honors and recognition in local, state, regional, and national competitions, and have been featured on NPR and on WQXR-FM in New York. He has recorded for Seoul Records (Korea), is listed in Who's Who among America's Teachers, and American Keyboard Artists. Previous to his appointment at UAA, Smith taught class piano at the Juilliard School, and undergraduate piano at the State University of New York at Stony Brook. In addition to teaching piano at UAA, Dr. Smith teaches Chamber Music and Piano Master Class. Smith has extensive university administrative experience, with 19 years as Chair of the Department of Music, and currently as Associate Dean for the Fine Arts at UAA. As Department Chair in the 1990s, Smith led the department to receive its accreditation with NASM. His solo recording, Timothy Smith plays Liszt, has been released nationally by Albany Records and is currently available online at MSR Classics, and also on iTunes. Of this recording, Adrian Corleonis of Fanfare Magazine wrote, "...impressive and towering...one of the more gripping accounts of the (Liszt) Sonata in recent memory."

Smith gave a solo recital in Seattle's Town Hall and was a featured performer on KING-FM radio. He also gave a solo recital and master class at the University of Hawaii. His performance of the Khachaturian concerto with the Anchorage Symphony Orchestra, conducted by Randall Fleischer, was a huge success. Other concerts include a solo recital in Nagoya, Japan at the Fushimi Denki Bunka Kaikan, a Steinway hall, as well as solo recitals in Arcata, Santa Barbara, Sacramento, and in Vancouver, B.C. The past season Smith gave solo recitals in Anchorage, Baton Rouge (at LSU), and Tacoma (at Pacific Lutheran University). He also was a judge for the Simon Fiset competition in Seattle for the Seattle Music Teachers Association.

In another notable concert event, Smith gave two performances of a two piano concerto entitled"A Green Call"  with pianist Sa Chen and the China National Symphony Orchestra, conducted by Terje Mikkelsen. The concert was held in the Poly Plaza theatre in Beijing, and it was repeated in the Tianqiao Theatre, also in Beijing, with the Norwegian Prime Minister in attendance. The first concert was videotaped and broadcast twice nationally over Chinese Television (CCTV, also known as Chinese Central Television.) It was also broadcast later in Norway.

In the summer of 2006, Smith had a very successful month long concert tour of the People's Republic of China, where he gave concerts in Ningbo, Jinan (2), Dongying, Baotou, and in Beijing, where he performed at the large concert hall in the Forbidden City. Master classes were also given in Ningbo, Jinan, Dongying, and Baotou.

Smith was invited to join the faculty of the Sewanee Summer Music Festival for its 2008 season, where he performed with such distinguished musicians as Janet Sung and Keith Redpath (violins), Hillary Hearndon (viola), and Paul York (cello). In August of 2010 Smith gave a concert with Japanese tenor John Ken Nuzzo in Nagoya, and that next month, Smith opened with the Anchorage Symphony as featured soloist, performing the Liszt Concerto No. 2 in A major. Two more concerts with tenor John Nuzzo followed that season, one in recital in Anchorage in January of 2011, followed by a "Japan Relief Concert" also in Anchorage in June.

In the summer of 2011, Smith performed across China on a concert tour covering six cities, resulting in six performances and three master classes (Dongying, Chongqing, and Suzhou). Performances were given in Lanzhou, Qingdao, Dongying, Chongqing, Guangzhou, and Suzhou. The concerts in Qingdao and Guangzhou were part of a larger "gala concert" where the artist shared the stage at alternate times with the local symphony orchestras. Lanzhou, Dongying, Chongqing and Suzhou were full solo recitals. In Chongqing, Smith was joined by pianist Sa Chen and a faculty member from the Beijing Conservatory who also contributed to the Chongqing performance. Smith was also joined by his wife Rumi where they were featured as duo pianists on several of the concerts. Both Smith and his wife gave master classes at the Chonqing School for the Arts, as a part of their International Summer Piano Festival. This was Smith's fourth invited trip to China.

Smith is currently working on a research project that involves the use of Tobii eye scanning technology to evaluate sight-reading habits of pianists. Possibilities for this technology may include improved tools and approaches for instruction in this area. The UAA Green & Gold News featured an article on this research project in April 2014.

Timothy Smith is a Steinway Concert Artist, and is the Sr. Associate Dean of the College of Arts & Sciences at UAA.